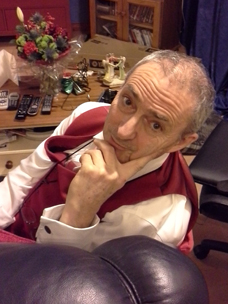 Don White successfully completed three years’ full time study in July 1996 at the Alexander Re-education Centre (then in Aylesbury/Stoke Mandeville) under Ray Evans and Ron Colyer, and has taught individuals and occasional groups ever since.

In an earlier existence after a succession of infants and junior schools (his father was an RAF officer) he was educated at Withernsea High School, East Yorks., Down High School, Co Down, Hamond’s Grammar School, Norfolk, and then went on to study Applied Mathematics and Statistics to obtain a Bachelor of Science degree from the Queens University of Belfast. He has worked in the Telecommunications industry for twenty-two years in various fields including organisational development, quality, computing, architectural liaison, and finance.

The impact of the Technique on his Myalgic Encephalomyelitis (M.E.) from which he has now fully recovered, was what originally convinced him to become a teacher of the Alexander Technique.

Don is married to Nuala and has children Siobhan, Tara and Danny, as well as grand-daughter Emma.